Before purchasing an “Internet of things” (IoT) device — a thermostat, camera or appliance made to be remotely accessed and/or controlled over the Internet — consider whether you can realistically care for and feed the security needs of yet another IoT thing. After all, there is a good chance your newly adopted IoT puppy will be:

-chewing holes in your network defenses;
-gnawing open new critical security weaknesses;
-bred by a vendor that seldom and belatedly patches;
-tough to wrangle down and patch

In April 2014, researchers at Cisco alerted HVAC vendor Trane about three separate critical vulnerabilities in their ComfortLink II line of Internet-connected thermostats. These thermostats feature large color LCD screens and a Busybox-based computer that connects directly to your wireless network, allowing the device to display not just the temperature in your home but also personal photo collections, the local weather forecast, and live weather radar maps, among other things. 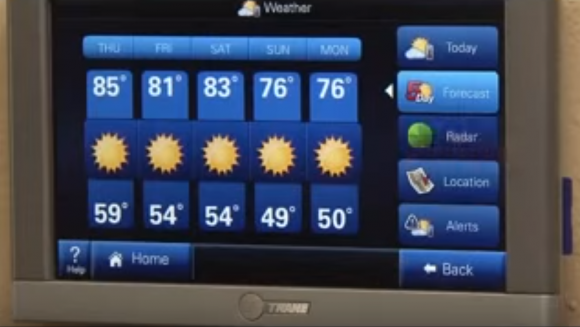 Cisco researchers found that the ComfortLink devices allow attackers to gain remote access and also use these devices as a jumping off point to access the rest of a user’s network. Trane has not yet responded to requests for comment.

One big problem is that the ComfortLink thermostats come with credentials that have hardcoded passwords, Cisco found. By default, the accounts can be used to remotely log in to the system over “SSH,” an encrypted communications tunnel that many users allow through their firewall.

The two other bugs Cisco reported to Trane would allow attackers to install their own malicious software on vulnerable Trane devices, and use those systems to maintain a persistent presence on the victim’s local network.

On January 26, 2016, Trane patched the more serious of the flaws (the hardcoded credentials). According to Cisco, Trane patched the other two bugs part of a standard update released back in May 2015, but apparently without providing customers any indication that the update was critical to their protection efforts.

What does this mean for the average user?

“Compromising IoT devices allow unfettered access though the network to any other devices on the network,” said Craig Williams, security outreach manager at Cisco. “To make matters worse almost no one has access to their thermostat at an [operating system] layer to notice that it has been compromised. No one wakes up and thinks, ‘Hey, it’s time to update my thermostats firmware.’ Typically once someone compromises these devices they will stay compromised until replaced. Basically it gives an attacker a perfect foothold to move laterally though a network.”

Hidden accounts and insecure defaults are not unusual for IoT devices. What’s more, patching vulnerable devices can be complicated, if not impossible, for the average user or for those who are not technically savvy. Trane’s instructions for applying the latest update are here.

“For organizations that maintain large amounts of IoT devices on their network, there may not be a way to update a device that scales, creating a nightmare scenario,” Williams wrote in an email explaining the research. “I suspect as we start seeing more IoT devices that require security updates this is going to become a common problem as the lifetime of IoT devices greatly exceed what would be thought of as the typical software lifetime (2 years vs 10 years).”

If these IoT vulnerabilities sound like something straight out of a Hollywood hacker movie script, that’s not far from the truth. In the first season of the outstanding television series Mr. Robot, the main character [SPOILER ALERT] plots to destroy data on backup tapes stored at an Iron Mountain facility by exploiting a vulnerability in an HVAC system to raise the ambient temperature at the targeted facility.

This entry was posted on Monday, February 8th, 2016 at 10:15 am and is filed under A Little Sunshine. You can follow any comments to this entry through the RSS 2.0 feed. You can skip to the end and leave a comment. Pinging is currently not allowed.