In the previous two stories, I documented the damage wrought by an organized crime gang in Mexico that has been systematically bribing ATM technicians to install Bluetooth skimming components that allow thieves to steal card and PIN data wirelessly. What follows is a look at a mysterious new ATM company in Mexico that sources say may be tied to the skimming activity.

One ATM company operating in the Cancun area whose machines were apparently free from these skimming devices is a relatively new entity called Intacash. This company’s ATMs positively blanketed many of the areas I visited, particularly in the heavy tourist and commercial areas of downtown Cancun and Playa Del Carmen. For example, in a single city block on Boulevard Kukulcan in Zona Hotelera — probably the busiest tourist spot in Cancun — I counted no fewer than ten Intacash ATMs, most of which were all less than a couple hundred yards from each another. 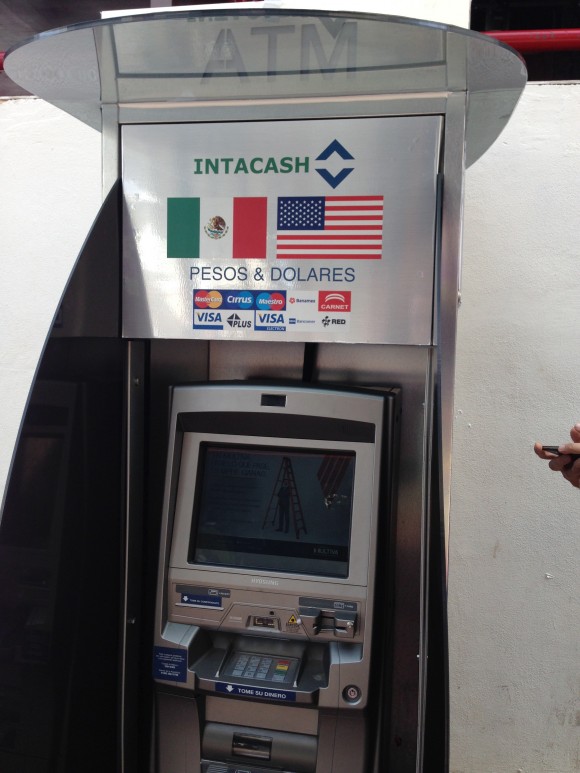 Intacash ATMs positively blanket the most busy area of downtown Cancun and in very tight proximity to one another.

Two different ATM experts familiar with rates charged to place ATMs in the area and who asked to remain anonymous said there is no way Intacash could afford the rent required to place so many ATMs in such close proximity on public property and still turn a monthly profit. No way, that is, unless the company had a different profit motive in mind.

Intacash is a relative newcomer to the ATM scene in Mexico, bringing its first ATMs online there a little more than a year ago. It’s not at all clear who runs or owns Intacash, and there is precious little public information available about this company.

Intacash.com, registered in early 2014, consists of just  four Web pages. There is no contact information for the firm on its site, which to this day has exactly zero sites linking in to it. From its inception, the site’s registration records have been hidden behind WHOIS privacy protection services. Intacash hosts its sites along with more than 6,000 other sites on a shared server at GoDaddy.com (for security and other reasons, financial institutions and service providers more typically spring for their own, dedicated servers).

Despite the presence of nearly 70 Intacash ATMs in Cancun, Playa Del Carmen, Tulum and other tourist areas in the Yucatan Peninsula, this company seems to have gone out of its way not to be noticed online. What’s more, a review of the text on Intacash.com suggests that much of the Web content on the site has been copied verbatim from other sites that preceded Intacash’s existence on the Internet.

Why was I so keen to learn more about Intacash? My source in the ATM industry who tipped me off about the Bluetooth skimming activity showcased in the first two stories here said his technicians began receiving bribes to let strangers install skimming components inside their machines around the same time that Intacash came online in Mexico. By early this year, all of my source’s ATM technicians had reported being approached by one of two guys who were trying to buy access to ATMs. The employees who reported these incidents to my ATM industry source said the men had Eastern European accents.

Several of my source’s employees later identified the men who approached them after managing to locate their profile pages on Whatsapp, a popular mobile messaging service.

“My partner was at a meeting with the operating manager of [a major hotel] in Cancun, doing his sales pitch,” my source recalled in a recent interview. “And the fellow at the hotel told my guy that just the day before he’d been approached by another ATM company, and that the guys were Eastern European.”

“My partner asked, ‘Just out of curiosity was it one of these guys?’” my source said. “The hotel manager said why, yes it was.”

Intacash may in fact be totally above-board. But beyond the above-mentioned circumstantial oddities, there are other clues that would suggest something is not quite right at Intacash.

For example, in my wanderings around Cancun and elsewhere in the region, I used a low-balance debit card to check out multiple Intacash ATMs — each of which offers customers the option to withdraw Mexican Pesos or U.S. Dollars. Curiously, every time I used one of these machines to make small Peso withdrawals, I received a paper receipt. Each time I took out dollars, I got no receipt (this behavior was the same across multiple Intacash machines).

In about one-third of the cases, after entering my PIN, the transactions were canceled without explanation (no receipt was issued in those failed transactions either). When I returned home and began researching this, it turns out I was not the only one who noticed this pattern.

Even more curious, Intacash ATMs charge nearly twice as much as virtually any other ATM company in the region for withdrawing funds — often 10 percent to 15 percent of the value of the withdrawal. I would imagine that a large percentage of consumers who put their cards and PINs into an Intacash ATM would cancel the transaction and look for another machine after seeing that withdrawing $100 would cost them $15.

I began to wonder whether it was possible that Intacash was a company essentially set up to capture card and PIN data? Phony ATM companies are certainly not unheard of, even in the United States. Back in 1993, U.S. federal agents arrested two men in Connecticut suspected of stealing more than $100,000 by placing fake ATMs. In the Connecticut case, the fraudsters simply placed fake ATMs that were devoid of cash. That may sound like a clever scheme, but the lack of cash in those machines is what quickly tipped off investigators that something was fishy about the ATMs.

Well, hang on a moment, you say: Wouldn’t selling or otherwise exploiting ATM/debit cards all stolen from one ATM company’s machines quickly draw unwanted attention from the banks, Visa and MasterCard to that company? You bet: Anyone in charge of such a fraud operation would want to spread their card-cloning scam across as many ATMs as possible: The more ATMs and the more ATM companies involved, the harder it is to trace the source of the fraudulent transactions. And here we come full circle to the cash machines in and around Cancun that were compromised with internal Bluetooth skimmers.

In addition, the  absence of receipts and the propensity for ATMs to randomly “cancel” transactions after users insert their cards and enter their PINs would make it easier for a large card cloning operation to hide much of their activity. For example, if the transaction is cancelled before it reaches the processing switch of the customer’s bank, there would be absolutely no record of the customer using the ATM, despite the card data and PIN being compromised

How much could a fake ATM operation with 70 ATMs pull in each month? Various ATM companies I spoke with in the process of reporting and writing this story said — depending on the location — a typical machine may need between 300-500 customers per month to become profitable.

If we take the low end of that, and assume that some customers (let’s say 30 percent for rounding purposes) will be repeat customers using the same card and PIN, that’s conservatively 200 cards per month per machine. Even if the average checking account tied to each ATM card had just $100 in it, that’s $20,000 per machine per month, or — again, very conservatively — about $1.5 million across all 70 machines per month.

THE KEY ROLE OF ATM TECHNICIANS

Several readers have asked why experts are so certain that ATM company installers — not random crooks — had to have been responsible for installing the Bluetooth card and PIN pad skimmers in the compromised devices I found in Mexico. The explanation has to do with the reality that modern ATMs are designed to protect the security and privacy of the user’s PIN once it is entered into the system, and more importantly to protect the integrity of the PIN pad itself. 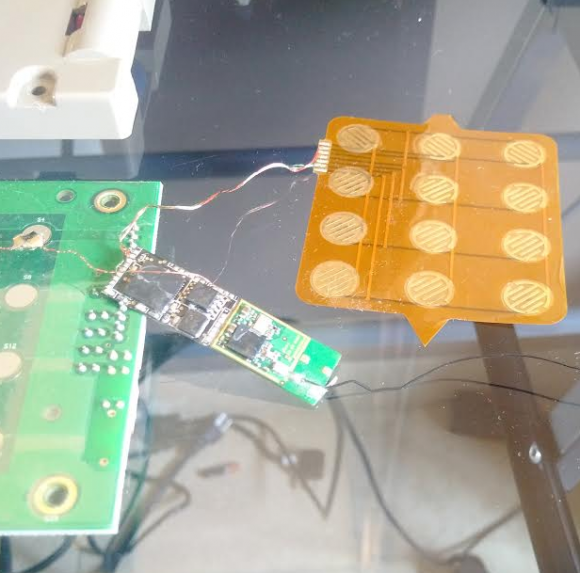 One of the Bluetooth PIN pads pulled from a compromised ATM in Mexico. The two components on the left are legitimate parts of the machine. The fake PIN pad made to be slipped under the legit PIN pad on the machine is the orange bit, top right. The Bluetooth and data storage chips are in the middle. The antenna for the Bluetooth board can be seen trailing off the right side of the photo.

If a random thief were to break into an ATM and attach electronic devices capable of intercepting PIN codes entered by customers, the ATM would simply cease to function properly after that. When ATM makers or banks wish to update software or hardware on their machines, they must subsequently input a special cryptographic key. That key — known as the “terminal master key,” is good for that machine and that machine only — and it comes directly from the manufacturer or the bank.

Some banks and ATM companies go a step further, requiring all such changes to be approved by two authorized personnel. This dual-authentication approach — the use of two keys, each assigned to different personnel who must approve physical and software changes to the ATM — is designed to short-circuit any attempts by rogue ATM installers to do what’s apparently been done in many Mexican ATMs. And it is likely that the victim ATMs documented in this series were not following this best practice.

Also, some readers have asked whether there was anything in particular about Mexico that made ATMs there more likely to be victimized by sophisticated ATM fraudsters who bribe their way into cash machines. I think the answer is yes and no. For one thing, the risks of doing this in the United States are far higher. It seems likely that anyone convicted of hacking cashing machines this way in the United States would be facing federal fraud charges and serious jail time here if convicted.

In Mexico, it seems unlikely such a person would ever even be prosecuted, let alone jailed for any length of time. Security experts I spoke with in Mexico said it is exceedingly easy to buy one’s way out of prosecution or jail in Mexico if one has the right amount of cash, and certainly an enterprise in charge of a skimming business or fake ATM empire would indeed have plenty of that.

But in practice, this scheme could happen anywhere in the United States, and I would fully expect it to migrate north of the border soon (if it hasn’t already). There are no doubt plenty of ATMs that allow the swapping in of hardware without requiring two people to sign off on the change, and people here are obviously susceptible to bribes. It’s also worth noting that technicians here and abroad alike can be coerced into cooperating with thieves via non-financial means, such as extortion or threats to their personal safety and/or that of their families.

Finally, many readers have asked if any of the skimmed ATMs I found in Mexico were bank-owned and operated ATMs, or machines on the premises of bank properties. None of them were: All were free-standing cash machines owned and operated by private companies.

This entry was posted on Thursday, September 17th, 2015 at 12:02 am and is filed under A Little Sunshine, All About Skimmers. You can follow any comments to this entry through the RSS 2.0 feed. You can skip to the end and leave a comment. Pinging is currently not allowed.